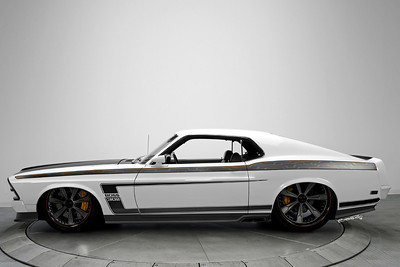 In 1969, Ford automotive introduced the “Boss” to its Mustang line. This was a huge change in style and performance from the original model released 4-years prior. The “Boss” went on to become one of the most iconic muscle cars. The introduction of this new type of car was the segway from “Pony” to “Powerhouse”.

The release of the first Mustang came with massive sales and critical response. Ford had planned the first year of sales to reach around 100,000 units. Surprisingly, within the first day of the Mustangs launch, pre-orders went up into 22,000 sales. By the end of the first year, Ford had sold over 400,000 Mustangs. The concept of the first Mustang was titled a “Pony Car”. This identified these cars as sporty, with a moderately large engine (for the time) that someone could revamp easily and deck it out.

Following the Ford model, it released a “sports car for everyone”. Gone were the times of high-performance vehicles that one had to be wealthy to enjoy. Now, anyone could buy one, throw some super parts in it and have a powerhouse vehicle. Unfortunately, Ford soon ran into competition in the likes of Chevy, Dodge, Plymouth, and Pontiac. The “pony car war” had begun. Over the next few years, these auto manufacturers had their own version of the “space race” to see who could build the most powerful engine.

With the Chevy Camaro, Dodge Challenger, Charger, Plymouth Duster, and last but not least, Pontiac GTO/ Firebird. The race was on! Just like when you floor it at the starting line, each auto manufacturer came out with models that would one-up each other. Ford had to move quickly to keep up with what they inherently started. Thus, the creation of the Boss model of the Mustang was introduced. With a revamped style to match its ferocity, the Boss would be hailed as one of the greatest sports cars of all time as well as one of the coolest. Imagine being so stoked on having the biggest engine on the block. Now imagine that the engine is so big that the company that built the car didn’t have enough space to throw in an A/C unit.

The 1969–70 Boss 302 (Hi-Po) engine was created in 1968 for the SCCA’s 1969 Trans-Am road racing series. Available in the Boss 302 Mustangs of 1969–70, it’s a unique Ford small-block engine featuring a thin-wall, high nickel content block casting. It differed substantially from regular 302s, with 4-bolt mains, screw-in freeze plugs, and heads using a canted valve design being developed for the planned 351 Cleveland (which debuted the following year). The construction was aided by the two engines sharing a cylinder head bolt pattern, though the Boss 302 heads had to have their coolant passages slightly modified.

Have a Boss Mustang?

At Car Transport Chicago, we love shipping high-end Exotic Vehicles. From the 60’s-’70’s muscle cars to Ferrari’s and Lamborghini’s, we offer fantastic enclosed and exotic car shipping! If you are a car collector of any sort and need your car shipped, let us take care of it!