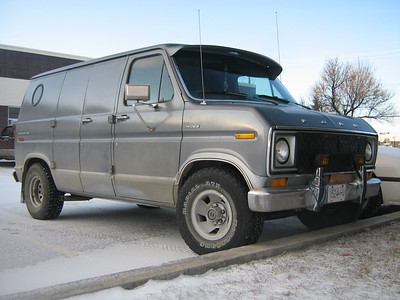 The Ford Econoline (or E-Series for short) is the staple in the post-hippie van craze. With many oil exports and a revamping of speed limits, the muscle car craze was finished, what came next was the re-imagining of what “living-space” would be considered as.

Everyone knows about the ’60s. If you were born after, then you’re stuck hearing the inert ramblings of previous generations “Dead-Heads”. You have the flower crowns, the “Free-Love”, the Jimi Hendrix, Woodstock, summer dress vibe of the ’60s. That was cool and all, but not nearly as cool as what came next.

The 60’s Muscle Car Craze Coincides with The Hippie Bus

Alongside the counter-culture movement, the 60’s also brought about the first-ever “Pony Car”: The Mustang. In 1965, Ford released the Mustang a sporty and affordable car that could be powerful on its own, or if you were good at building cars and had a hobby of it, you could supe up that pony into a wild stallion. At this point, you had a fissure in trends. On one side you had the free-spirited dreamers in their (maybe) 75 horsepower VW Bus next to the more hard-rocking and fast-paced sports cars. By the early ’70s, these would end up creating a solid merging. By this time, the muscle car craze was in full-swing with Chevy, Pontiac, Ford, Dodge, Plymouth, and many others taking their sports cars, throwing a V8 in them and sending them off to speed freaks.

The ’70s Came Along and Changed Everything. Thus: Focus Became Vans

Okay, so here’s the deal. The ’70s with all its freedom and hard-rocking hit a “speed-bump” midway through the decade. Oil embargos had shifted the attention of consumers away from big gas-guzzling V8 supercars. Instead, the oil embargo created smaller cars with less horsepower as well as the United States made the great idea of lowering the speed limit to 55mph. Well, if you were going to go slow, you better go slow in style. Vans were becoming more popular within the market, often taking the place of pick-up trucks.

The ability to haul is still to this day perfect for those in the trade. On the other side of things, these vans were getting bigger. Both in wheelbase and overall cab size, they quickly became the focus for young drivers with the knack for customizing cars. The Ford Econoline became the van of choice amongst these customization specialists. So with all that space, what do you do with it? Well, you made it the coolest room on the planet.

Customization specialists would turn these vans into the meanest man-vans on the road. With a super V8 engine (which didn’t make anything go really that fast) and all-wheel-drive capabilities, the Ford Econoline would spearhead the new craze of living on the road. Once the flooring was stripped out, it was easy to re-line the walls and install cabinets. Once that was done, it was time for the shag rug.

Shag carpeting was a staple in what these power-vans had to offer. On top of that installing a comfortable bed, some cabinets and a mini-fridge meant these things could go anywhere at any time and you could essentially not have to purchase a home. the downside with traveling came from work. Now, on the outside, instead of simply having a utility van which was white or blue, you could pay your buddy to paint a wizard, or unicorn, or a wizard riding a unicorn, or even KISS.

Every van had its own special design and name. From the typical “Shaggin’ Wagon” to more broader and cooler terms like “Groovin’ Boogie”. The van became a staple of youth in the times.

With the inception of the custom living van, sales for the Econoline sky-rocketed. Again, everyone had their own spin, design, and layout for their “dream-room”. From the introduction to waterbeds to fully converted stoves and bedframes, these things were the coolest customized vans around. Each van had its own theme.