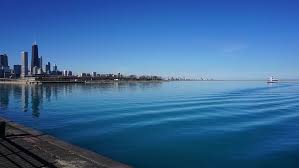 Lake Michigan, one of Chicago’s most attractive features, reached a new water level high in January for the first time in 30 years. 2020’s January beat out 1987’s January by about 4 inches. However, it remains 9 inches below the all-time record high from 1986.

Scientists account for the uncommonly high January water levels for Lake Michigan by citing unusually warm temperatures and excess rainfall. Because temperatures remained high during the winter month, snowmelt contributed to the water levels. Additionally, new precipitation fell in the form of rain, exacerbating the issue.

As a result, waves from the lake wallop against bluffs, causing erosion. Additionally, trails located near the shoreline disappear beneath the rising waters. Even shoreline homes and other structures fall prey to the shifting lake. Docks, beaches, and marinas fall beneath the surface of Lake Michigan.

While these consequences could be more easily accepted as one-offs, scientists suggest a new normal for Lake Michigan.

The city of Chicago experienced downpours amounting to almost 50 inches in 2019, its third wettest. Three of the other top five all took place within the last decade.

The trend follows along rising temperatures. For instance, 2016 marked the warmest year on record, boosted by the El Nino effect. 2019, without the help of a global weather pattern, achieved the second spot. Each degree of Fahrenheit increase yields 4 percent more room for water vapor. Essentially, hotter temps make more rain.

Predictions anticipate water levels for the lake breaking record highs possibly all the way into summer. Models suggest the high water levels may last into June.

With a warmer winter and wetter spring, Chicago and other communities living alongside Lake Michigan can expect a continued trend of rising water levels, so long as temperatures continue to rise.